We have uploaded our photos of Fårö, Gotland and Öland. If you click on this link you will be directed to our photo’s : Sweden. The photo’s of the Dodekalitten are in our Denmark folder. Please click here: Dodekalitten.

The destination was the island of Gotland in Sweden. The start-up route to Sweden was Zeeland – Erica in the Netherlands – Aabenraa in Denmark and through Denmark over the beautiful bridges:

to Sweden. Both bridges are masterpieces.

The trip in Sweden started in Skanör, where our first Swedish overnight stay also was. We followed the route along the coast to Oskarshamn, where we made the crossing to Visby on Gotland. On Gotland we toured and also made a crossing to the island of Fåro. After our stay on Gotland we spent a few days on Öland. On the way back from Öland to the Netherlands we made a stop at Kragenæs to admire the Dodekalitten.  Then by boat from Rodby to Puttgarden and on to Zeeland. 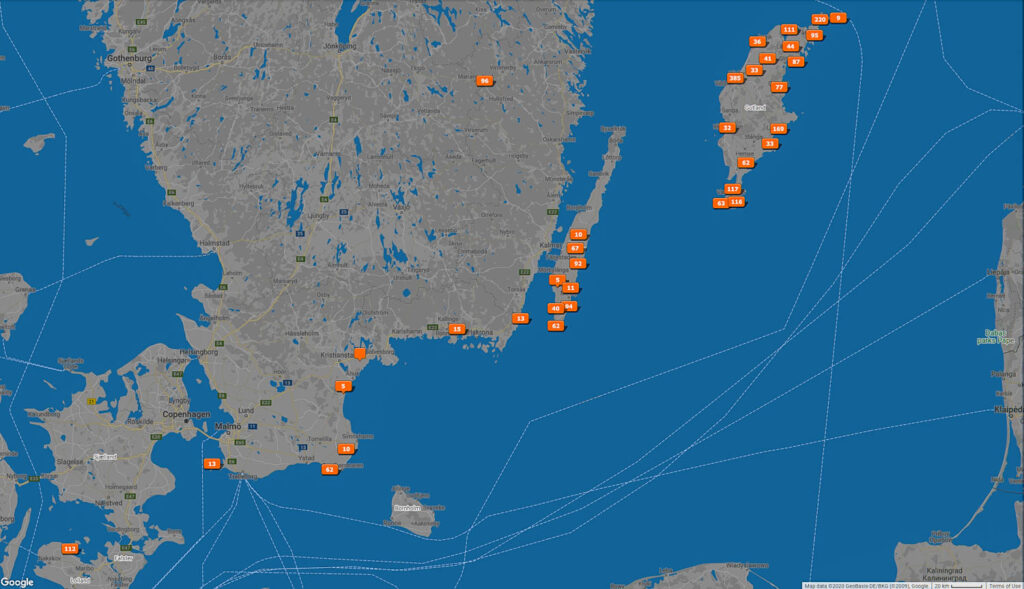 Ales Stenar. The Swedish Stonehenge. A tomb in the shape of a Viking-era ship. It is estimated that these graves are 1,400 years old. The granite boulders stand beautifully in the landscape with a view of the sea which is located more than 30 meters below. Ales Stenar is located near the old fishing village of Kåseberga, not far from Ystad, in southern Sweden’s Skåne.

On the way to Oskarshamn, where we took the boat to Gotland, we made a stop in Haslö. Haslö is located in the Karlskrona Archipelago, which consists of 1,650 islands and rocks. A peaceful area.

The penultimate stop on the way to Gotland was Kristianopel. It used to be a border post, when this area, Blekinge, was still part of Denmark. Kristianopel is very popular with the Swedes. When we were there in the late afternoon there was a nice atmosphere because of the late afternoon light. We walked through the village and along the old city wall.

Gotland is the largest island in the Baltic Sea. It measures 125 by 55 km. It is a unique island, located between Sweden and the Baltic states. It is unique in terms of geology, nature and cultural history. The capital of the island is Visby. We took the boat from Oskarshamn to Visby. The crossing takes about 3,5 hours. Travelling to an island by boat is a highlight in itself. It also evokes memories of our travels in Greece and the boat trips between Italy and Greece.

On the islands of Gotland, Fårö and Öland there are imposing rock formations that have been cut out of the limestone rocks by weather and wind. These formations are called raukar (rauks).  Some rauks are beautiful sculptures shaped by nature and some are famous and even have names. They trigger the imagination of many people and certainly our’s.

The first night we found a place in Bläse, near the Kalkbrukmuseum. The museum is special. Valuable industrial heritage. The museum tells about the history of the limestone industry on Gotland. The quarry and furnaces were in operation until 1956.  It’s beautifully located along the sea. We camped there for three nights with our camper. The light during the golden hour was magical every night.

The Halls Fiskeläge (Hallshuk). A fiskeläge means fishing village.  Hallshuk  is located in the parish of Hall on the northern tip of Gotland along the western bank of Kappelshamnsviken. At the outer point lies the mighty harbour mountain which falls steeply down to the sea. Under the mountain is the unprotected fishing port with fishing huts on a steep embankment. Hallshuk used to be one of Gotland’s most profitable fishing spots. Herring, cod and flounder were fished and salmon fishing continued well into the 20th century. During the fishing seasons, the fishermen lived in fire sheds below the cliff edge. Hallshuk was a test station for about 150 years and the lighthouse was staffed for 50 years. The pilot station and lighthouse were important, wind and currents are still erratic and sometimes very strong.

Yvonne likes to walk along the beach in search of fossils. At Ireviken she has found some beautiful  fossils.  It is a beautiful bay and very much loved by the surf tribe. Other interesting places for fossils are  Gothemhammer  and  Grogarnshuvud..

At the fishing village of Lickerhamn is the highest rauk, a natural limestone pillar, of Gotland. Jungfru is a rauk on Jungfruklint, a natural park that covers the cliff and a beach along a 400-meter-long coastline with rauks.  Rauk Jungfru is 11 meters high, with another 14 meters down to the to sea. Jungfru (or virgin) probably got her name because of the likeness of a woman standing on the edge of the cliff, but is also linked to a dramatic story about “Likair the Wise’s daughter, narrated by John Nihlén in the sagas.

The open-air museum in Bunge seems to us worth visiting. Since we traveled out of season, the museum was unfortunately closed. Yvonne was allowed to go in for a while and made beautiful photos in a rather short time. There are two very beautiful Gothic rune stones at the entrance of the museum.

At St. Olofsholm, a peninsula near the village of Hellvi on the North East coast we made a long walk. There is an old chapel, on the spot where in 1029 the Norwegian king Olof Haraldsson went ashore to bring Christianity to Gotland. In the past, pilgrims also walked to St.Olofsholm.

Very worthwile  it is the nature reserve at Narsholmen. It is a desolate area. In the area stands the imposing Nårs Fyr. The lighthouse, the sea and around it the desolate landscape. All in perfect harmony.  With the right light, you can take the most beautiful pictures here.

At Hundlausar  we saw three old windmills  in an open field. These are beautiful old mills, which are still in their original state. At least the exterior. The mills are freely accessible.

We visited the rauks at Holmhaller and the fiskeläge just at the right time. There were showers coming and the sky became dramatic. Occasionally you experience magical moments where everything is just about right. This was one of those moments. Although we had to shelter for the rain all the time, we enjoyed this magical world.

Gotland is called “the island with a hundred churches“. We’ve visited many of them.  We took a lot of pictures in the churches. In the period from 15 May to 15 September, the churches are open for public. Many times, only the two of us were in the church. Without exception, all are beautiful churches. Often with wall- and ceiling paintings. Also many carvings  in the pews, in the pulpits, crosses. Most churches were built in the period 1100 – 1350.

The Norwegian internet site Gravgaver is a fantastic site where many churches of Gotland are described and has quality photos of the interiors of the churches. This is the link:  https://www.gravgaver.no.

The last two days on Gotland we have been walking, through the showers, in Visby.  Visby is a beautiful old Hanseatic town. It is a Unesco World Heritage Site.  The 3,4 km long city wall around the Old Town is impressive, also due to the imposing entrance gates. In  Visby  there are more than 200 medieval buildings. Unique are the ruins of the medieval churches. Our advice is: stroll around the city at ease.

Fårö (“sheep island” or, according to an alternative explanation, “Island of the sailing people”) lies in the Baltic Sea, northeast of Gotland. It is separated from Gotland by a narrow strait, the Fårösund.

Fårö is 113 km² in size. It has about 600 permanent inhabitants. The island is flat and has many small lakes. The land consists largely of wild land and meadow land. On the north coast of the island are the previously mentioned curious erosion structures, the rauks.

In Fårösund  we took the small ferry from Gotland to Fårö. The crossing is free of charge! The crossing takes about 10 minutes.

At the Fårö kyrka  we visited the tomb of  Ingmar and Ingrid Bergman. The famous Swedish film director had a house on Fårö. He made movies there. He loved the island. Ingmar Bergman lived on the island for the last year of his life and died on Fårö in 2007. There is also a small museum near the church, the  Bergmancenter..

Near Langhammarsmaren is one of the most beautiful Fiskeläge of the Swedish islands: the Helgumannen Fiskeläge.  The fishermen’s cottages may not be that special, but the location and how the cottages are grouped is truly stunning.  It feels like this is the end of the world. With beautiful light you can make a beautiful photo  series. Ingmar Bergman used this location in his films.

One of the most beautiful rauks stands along the coast of Gamla Hamn. The raukar looks like a dog, rising majestically from the sea. This raukar is also called coffee pot, but for us it really is a dog.

In the landscape there are also very old sheepfolds, in Swedish “lambgift” and interesting old farms. We photographed some of them.

After Gotland we made a stopover in Vimmerby and the village of Sevedstorp before driving to Öland. This part of  Småland  was inspiration for the books of Astrid Lindgren. The Pipi Longstocking books and eg “The children of Bolderburen”. It’s not spectacular, but it’s nice to be there.

We took a walk at Fort Gråborg. It is very beautiful. Once this was is an important Vikingstrade post. It was walled with a 640m long stone wall, which is still fairly intact. To the north of the fort lies the ruins of the medieval St. Knut Chapel.

Stora Alvaret is an area of great natural beauty with a unique ecology. This limestone plateau, called an alvar, is located in the southeast of the island. It originated from the skeletal remains of many millions of prehistoric sea animals such as coral.  The limestone was under the sea until the last great ice age. The pressure of the retreating ice led to the limestone. The area is about 260 sq km and it covers a quarter of Öland.

We spent two nights at Seby Läge with our camper. It is a very nice place and very popular with birdwatchers. I understand the passion of the birdwatchers. The bird migration is spectacular. In this place you can marvel for hours among the continuous flow of migratory birds. The birdwatchers are a special tribe, like the surfer-tribe.

Sandby Borg is also such a beautiful place along the sea. Again limestone plateaus that often color very nicely. When we were there, it was a little misty.

Just like last year, we took another long walk in the Ottenby Nature Reserve. It is a favourite place for ornithologists, especially when thousands of migrating birds settle there in the autumn. There are many sheep grazing in the area. We also saw a herd of deer moving at breakneck speed.

We left Sweden via  the  beautiful  Öresund Bridge from Malmö to Copenhagen. The designer of the bridge is George  Rothne. The engineering firm  Arup  drew the constructive design. The length of the bridge is 9000 meters and was opened on 1 July 2000.

On our wish list of Denmark were also the Dodekalitten. It is in the  outer area  of  Kragenæs. Here is a monument of the future. It is an art project in in progress of 12 menhirs, carved from granite. Each menhir is 7.9 meters high. Out of the stones comes specially composed music for this project. The story of the Dodekalitten  goes back 7,500 years. A natural disaster in the Bosphorus that eventually led to migration of people, even to Lolland in Denmark. One sculpture a year is made.  Thomas Kadziola  is the sculptor and the music is by Wayne  Siegel. The project is beautifully placed in  the landscape, with always the sea as a backdrop.