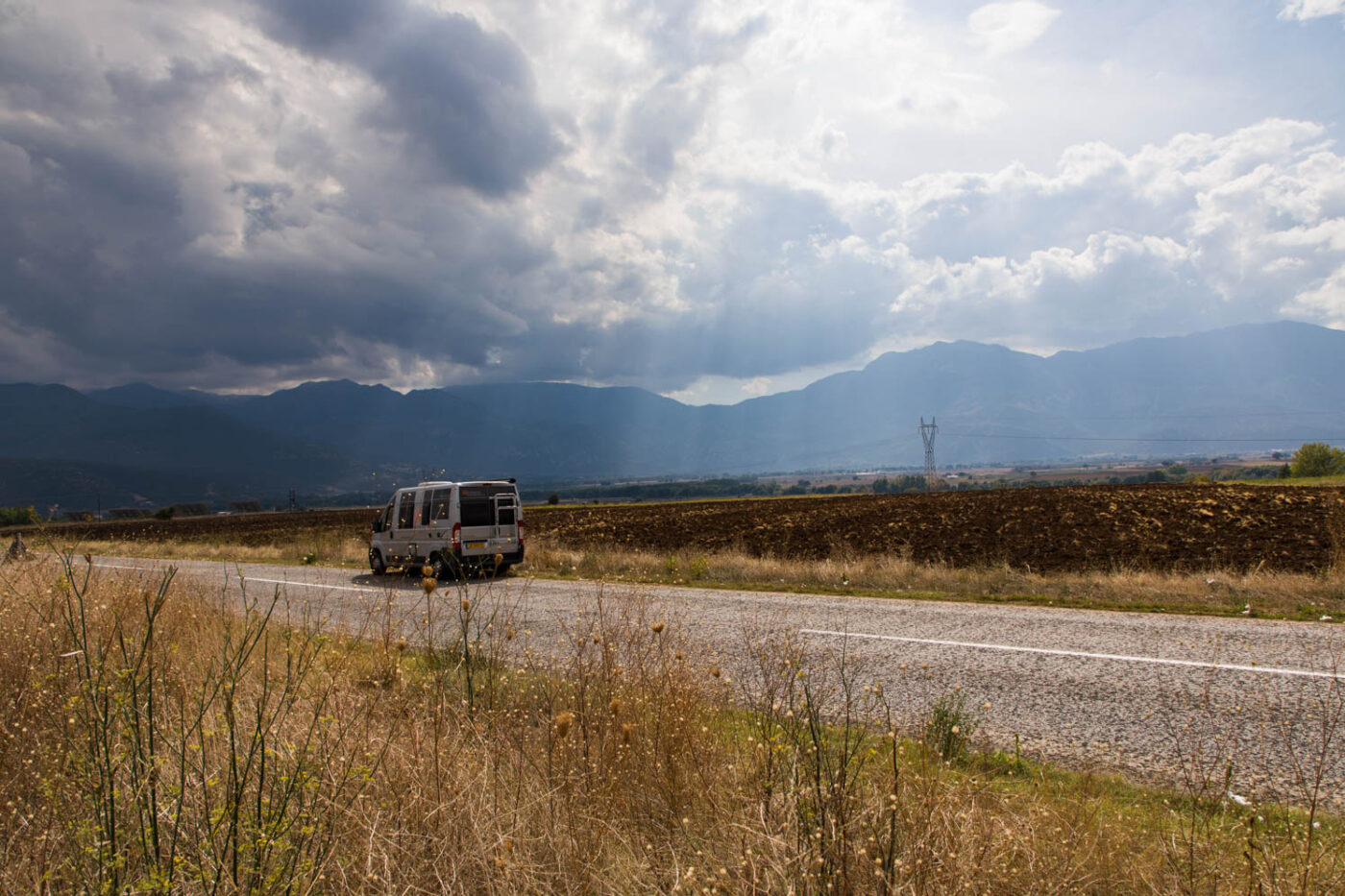 You are kindly invited to see the photos of our trip on:  SmugMug

The highlights of this trip

When we are heading to southern Italy or in this case Greece we go along Palazzago, where we have lived for eight years. Returning to Greece is in itself a highlight for us. We have lived in this beautiful country for six years. When we set our feet on land it is home coming for both of us. Also, for our dogs, they are both born on Corfu.

– the beautiful old stone bridges in the Zagori In Epirus. In 2002 we also made a walk along the Vikos Gorge. With our dogs, of which Precious is an unguided missile, it is too risky. The concrete bridge over the Voidomatis river, at Aristi, is a good place to stay.

– the route of Korinos, passing Mount Olympos, to Meteora. The tobacco plantations along the road are special.

–  Meteora is of course magical. Visit Meteora very early, because after nine o’clock the buses come with loads of tourists. We have been there 25 years ago during winter. It remains a wonder that on these masterful rocks these magnificent monasteries are built.

– the Pelion. We enjoyed the beautiful coastlines, but certainly also the inland.  A little gem was Paralia Theotokou, where we also stayed overnight. Macrinitsa and Tsangarada are definitely worth to make a stop.

– the area around Mount Parnassos. Orchomenos, the archaeological site, the Treasury of the Mynyas and opposite the Church of Skripou. The Jerusalem monastery. Osias Lucas is a must. Unfortunately, more commercial than 25 years ago, but still special.

– Delphi, a unique archaeological site. It is so beautiful, and you can wander for hours. We have been there many times and it always fascinates.

– In Distomo we have been to the monument in memory of 232 inhabitants of this place, who were shot on 10 June 1944 by the German occupiers. On the monument the ages are mentioned. All ages are represented.

– Galaxidi. With friends and family, we have spent many weekends in Galaxidi. At Bruno in pension Ganimedes. His breakfast was world famous. Unfortunately, Bruno died and is buried in Ponte St. Pietro in Italy, near Palazzago. Galaxidi is a beautiful place.

– the Bridge over the Gulf of Korinthos at Andirio. A piece of art.

– the remnants of the earthquake-stricken Plagia. Now a paradise for goats, geese and cats.

– the monument at Zálongo was for us both very impressive. In 1803, a group of sixty women, with their children jumped in the sea from a 700-meter-high cliff, to prevent themselves from falling into the hands of Ali Pasha’s son Veli. The story goes that the women, before they jumped, danced and sang. The Dance of Zalongo.

– the Byzantine Church at Agios Dhimitrios Katsourris. One of the more beautiful churches we have visited in Greece.

– the road to Koronissia, a long road that meanders through the Lagoon. A paradise for many birds, including herons and flamingos.

– the Country of the Souliats, A group of Albanian Orthodox Christians who populated 11 villages. What a beautiful area! So pure.