A brief travelogue of a roundtrip that we made in the late summer of 2019 with our buscamper in the south of Norway and Sweden.

In 2019 we have made a round trip, starting in Denmark, through South-West  Norway and we ended in the south of Sweden on the island of Öland. It was a fantastic trip. It is our plan to travel in Scandinavia every year and explore Scandinavia further. It has so much to offer and we have only seen a small part of it yet. The nature is stunning. The weather might be a challenge sometimes.

Bjulberg is a limestone cliff in northern Jutland. It is the only rock formation in Jutland, the only bird cliff on the Danish mainland. When we were there were many bird watchers. The bird tribe.

Other highlights of Denmark can be found in our travelogues of Denmark.

Lindesnes lighthouse is Norway’s oldest lighthouse dating back to 1656. It occupies the southernmost tip of the Norwegian mainland – 2518 km from the North Cape.

On the road Rv44 between Egersund and Flekkefjord, under Helleren in Jøssingfjord, are two unique small houses under an impressive rock formation. Both houses date back from the 1800’s. Helleren is large, the drop fall measures 10 meters at its deepest. Helleren (“Hedlaren”), forms a natural roof for the light blue and red house.

Varhaug gamle kyrkjegard. The first church at Varhaug was built in the 13th century. The old church was demolished in 1905 and replaced by a small burial chapel. The scenic cemetery faces the ocean. There is also a monument to nine Russian sailors who were washed ashore after the naval vessel “Ingermanland” was shipwrecked in 1842

Skudeneshavn. Is described as an idyllic coastal town. It may well be, but the tourists and the new rich do not do well to this old town. It is still worth strolling through the old fishermen’s town and admiring the old houses and narrow streets and try to ignore the influence of the new world.

The mountain road between Aurland and Lærdal. The crossing Aurland – Lærdal- Aurlandsfjellet is 48 km and the highest point 1306 m above sea-level. With the camper it was a challenge to drive the fisrt segment of 7 km’s. You will come away with powerful impressions, and the contrasts between the fjord and the high mountain region where snow lies on the ground for most of the year are compelling. The road is also called “the snowroad”, since you can see snow along the road most of the summer. We were here during the weekend and we regretfully could not make a stop at Stegastein. However, the desolate landscape higher up was so beautiful that we have spent hours here.

Borgund Stavkyrkje. Built around 1180 and is dedicated to the Apostle Andrew. The church is exceptionally well preserved and is one of the most distinctive stave churches in Norway. Some of the finest features are the lavishly carved portals and the roof carvings of dragons’s heads. The stavchurches are Norway’s most important contribution to world architecture and Norway’s oldest preserved timber buildings.

Lærdalsøyri. The village is located along the Lærdalselvi river where it empties into the Lærdalsfjorden, a branch off of the main Sognefjorden.The village center is listed as a national “heritage village” and tourists come to see the old city center with its 161 wooden houses that date from 1700-1800.[4] Old Lærdalsøyri used to be a trading port between east and west in Norway.

Jostedalsbreen National Park covers an area of 1,310 square kilometers. Jostedalsbreen is the biggest glacier in mainland Europe and covers 487 square km2 of the park. The national park also contains many other large and small glaciers. The Jostedalsbreen glacier divides two of the world’s longest fjords, the Sognefjord and the Nordfjord. We made a walk to the Bergsetbreen in the early morning, which was a great experience.

Dale Kyrkje in Luster. The church is built around 1250 in Gothic style. We found the colours of the church nice, but the most beautiful part is inside the church, in particular the lime paintings.

The Sognefjell route. This was the culmination of our trip in Norway. This route, the R55, winds from Lom in the Gudsbransdal, over the Sognefjell to Sognefjord. It is the most spectacular route to the fjords area. It is a beautiful area with breath taking scenery. The highest mountain of Norway, the Galdhøpiggen (2.469 m) lies in this area. You feel void in this landscape. We have taken a lot of pictures. The light was beautiful.

The petroglyphs at Tanum. In Sweden, many petroglyphs from the Bronze Age, the period of about 3,700 to 2.500 years ago, have been preserved. The largest group is here in Bohuslän. The location is on the UNESCO World Heritage List. We have visited a number of places. At Vitlycke we made a long walk. We very much like the drawings and we believe that many artists are inspired by these drawings.

Svenneby gamla kyrka. A beautiful church, but although the Church would be open all day, it remained closed when we visited the church.

Fjällbacka. Beautiful village, which is hidden under overhanging rocks. The road through the gorge to the top of the rocks with the beautiful view of the village and the fjord is definitely worth the climb. The village, how can it be otherwise, is very touristic, but still ok. The village has been and still is the decor for movies and TV series. There is a special place designed for Ingrid Bergman, with photos and a bust of her.

Granhults Kyrka. It is the oldest surviving wooden church in Sweden. The church was built around 1220. The church is beautiful on the outside, but we especially liked the interior and the atmosphere in the church. The murals go back to 1750, but there are also fragments from the Middle Ages. Sweden has beautiful old churches. This one is high on our list.

Dädesjö gamla kyrka. The old church is best known for its special wall and ceiling paintings from the 13th century. A beautiful sober church in a beautiful setting.

Transjö Hytta. A small glassblowing farm in the forests of Sweden. This small factory was set up by two master glassblowers, Jan-Erik Ritzman and Sven-Åke Carlsson. They learned the profession at Kosta Boda. The glassblowing farm itself is only active in winters. But in the garden and the atelier are beautiful works of art of glass to see. In the future we hope to visit more small glass workshops in this region. This region is called the Glass Kingdom of Smålland and it is located between Växjö and Nybro. Glass is such a beautiful material!

The Mönsterås Kustvåg is a beautiful coastal road from Kåremo to Mönsterås. A beautiful oer nature landscape. Pataholm is an old trading post with beautiful characteristic houses

We have been on the island of Öland for a number of days. A beautiful island now connected with a bridge with the main land of Sweden. We felt at home here. Very varied vegetation, prehistoric monuments, rural churches, windmills and miles of beaches. The perfect spot for us. Below are some highlights of Öland.

Byrums Raukar and Neptuni Akrår. On the West Coast, the nature reserve shows the contrast between grey stones and the snake herb. Beautiful to photograph. The light and the clouds were Scandinavian beautiful. Also, on the West Coast are the limestone formations of Byrums Raukar formed by the wind and waves. The stone statues have been formed by the sea over millions of years. If you like fossils, this is also a paradise.

Långe Erik, official name Ölands Norra Udde, is a lighthouse built in 1845 and stands on a very small island, Stora Grundet, which is connected to the northern part of Öland. There are lots of water birds to see. The small island with the lighthouse is definitely worth a visit.

Källa Odekyrka. is the well-preserved ruin of a large 12th century fortified church near Källahamn on the east coast of Öland. From the outside, the ruin is completely intact and still looks almost like it did 750 years ago. But the inside of the building is empty. We found it to be a beautiful church. Especially with the old graves that lie around the church. Nice atmosphere.

Sankta Brita Kapell, Kapelludden is located on the east coast of the island of Öland, about four kilometers from the village of Bredsättra, in a marshy area called Kapelludden. The chapel dates back to the 13th century. Today there is nothing left over then foundation and the eastern wall, the Western Wall is devastated during a storm in 1914. With the right light, a beautiful photographic location.

Gräsgård Fiskehamn. On the east coast, about 5km north of Eketorp. Gräsgårds Fiskehamn is a little smelly fishing port where a salesman sells fish and chips. We found it a nice charming little harbour, without tourist shops.

Ottenby Nature Reserve, with the lighthouse Långe Jan. A truly beautiful nature reserve, in the extreme south of Öland. Paradise for birdwatchers. The landscape is flat, with rolling stones, isolated by the wind deformed trees, some old houses and of course sheep and lots of birds. The 42m high lighthouse stands majestically in the landscape.

Gettlinge gravfält. Gettlinge Gravfält is one of the largest and most certainly most beautiful prehistoric cemeteries on the island of Öland. The grave field extends over a total length of about two kilometres with a good view over the Strait of Kalmar. The entire cemetery once consisted of about 250 graves, most of them were typically bronze and Iron age tumuli. 15 of the more than 200 surviving graves have been investigated archaeological. The studies have shown that the grave field over a period of approximately 2,000 years-from approximately 1000 BC up to 1050 AD was in use. 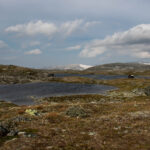