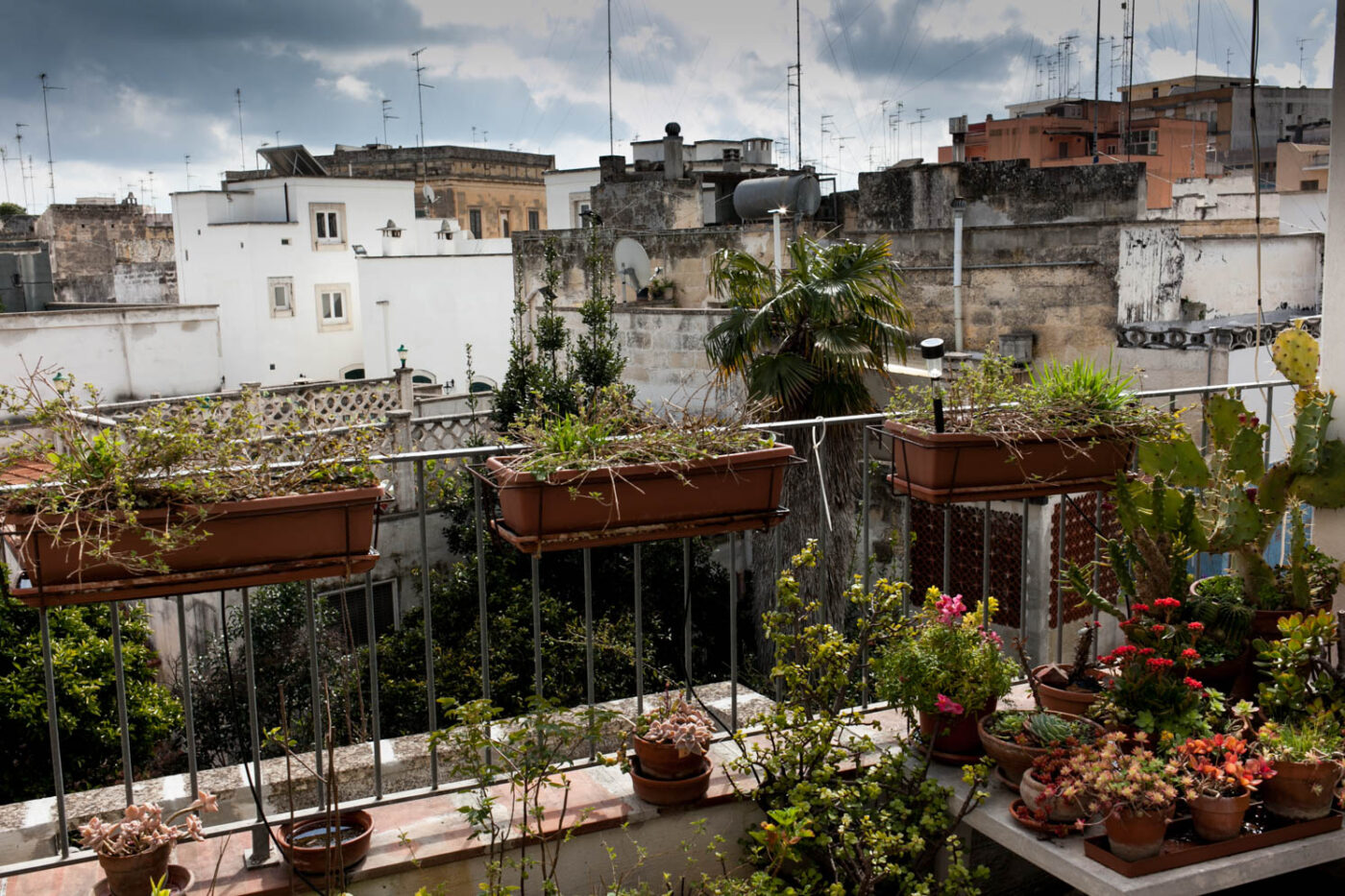 In 2015 we lived in Lecce for about two months. We rented an apartment in the middle of the old town. During the weekends and the Easter week we explored Puglia and Basilicata. In 2017, on a trip by camper to Greece, we visited Monopoli and Polignano a Mare. In 2015, Lecce, a beautiful city, was our home base.  In the evening we regularly went out for dinner and almost every evening and on weekends we took walks through the Old Town. Below you will find a concise description of the places we have visited, all recommended to visit. We have published an extensive photo report on SmugMug. As a teaser you will find some photos of our series here below.

Lecce is an imposing city, baroque architecture and buildings with magnificent façades. In the streets, in the squares, in the alleys it is lively. Typical activities on weekdays were: buying fresh bread from a small bakery at the Teatro Romano, throw coins in the parking meter every morning to park for that day, lunch on the roof terrace in the afternoon. In the evening after work, we had dinner at home or in a trattoria and then a walk through the city.  The atmosphere in the city changes with the hour due to the changed light conditions. Attractions: Castello de Carlo V, Piazza Sant’Oranzo, Basilica di Santa Croce, Teatro Romano, Piazza del Duomo, the Duomo.  We had deliberately chosen for this period to also experience Easter in southern Italy. Venerdi Santo in Lecce was impressive in particular the procession through the city. See our black & white photos here.

Ostuni is worth a visit. Like all towns and villages described here, most have a beautiful historical center (centro storico). So has Ostuni. The most beautiful view of Ostuni is when you come from the north. The white city is spread over three hills with in the middle the dark cathedral with the golden dome.

Monopoli is a lively town with a beautiful historical center. It is wonderful strolling through the narrow alleys in particular along the old port, the Porto Vecchio and the city wall. In the late afternoon it is very lively on the Porto Vecchio, when the fishing boats have arrived, and the fishermen sell their catch.

A beautiful quaint town. The attraction is mainly due to the white-sauced houses of the old town, which are densely built on a rock above the turquoise sea. This is also a small town to stroll through and enjoy the Italian atmosphere.

We’ve been here a few hours. A very nice old center, with a restored castle and the interesting, colossal Chiesa Madre. Ceglie Messapica is located in the Terra di Gastronomia. Highly recommended by a former colleague of mine and he is a connoisseur of the region and the local cuisine, is restaurant Cibus. If you like food or are interested in stories from this region, then I recommend you to buy the booklet Lekkerissimo by Frans van Munster. I don’t know if it’s still for sale. Frans lives near Ceglie Messapica and describes his adventures in this area, but also the delicious local dishes. A nice video on YouTube about Frans: Fratello & Sorela.

After our six Greek years, we are interested in almost everything that has to do with Greek culture. We had read that in the south of Italy there are two communities that have their origins which go back to the colonization of these territories by the Greeks. The older inhabitants speak Griko, an ancient Greek dialect. Calimera, everyone knows what this means, is in one of these communities, the Grecia Salentina. Calimera is a nice village and interesting to us for the Greek history. You might consider to also visit Sternatia in the Grecia Salentina. The small town has characteristic old streets and a nice church.

The Valle d’Itria region and Alberrobello in particular are famous for the trulli (plural of trullo). A trullo is a structure typical of the region between southern Italy, Brindisi and Taranto. Characteristic of the trullo is the conical roof, sometimes decorated with Christian or magical symbols. No cement is used in the construction of the limestone houses. We were in this area in 2002 and then Alberrobello was still fairly original and the town was really a place for the locals. But here, too, mass tourism has its impact. Nevertheless, Alberrobello remains highly recommended and in the valley are beautiful old trulli. Alberrobello was listed as a UNESCO World Heritage Site in 1996.

In 2002 we also visited Matera for the first time. We lived in Italy and we wanted to get to know the south of Italy better.  This cave town made a big impression on us. The fact that two thirds of the population of the city of Matera had lived here until about 1950 was unimaginable. There were two cave settlements (Italian: sassi), Sasso Barisano and Sasso Caveoso. The people lived here in very small rooms with large families (average six). The conditions were dire. After the 2nd World War The writer Carlo Levi committed himself to improving living conditions and about 15,000 people were given other housing around 1952 and no one wanted to return there.

But in 1975 some young people moved back into the sassi and initiatives were taken to refurbish homes, buildings and cave churches. When we were in Matera in 2002 the renovation was still in its early stages. Tourism was also limited. Matera was made a UNESCO World Heritage Site in 1993.

In 2015 we visited Matera again and we were surprised. What a job was done here. A lot of houses and buildings were restored. But there were also many restaurants, hotels located to attract tourists. Matera is, by all means, still worth visiting. It’s a unique city. A lot of scrambling, but that will be rewarded by the beautiful views of the city with its unique architecture and its surroundings.

The town sits on a hilltop high above the river valleys of the Basento and the Cavone, eight kilometers away from the Ionian Sea. It is well known as the production site of Amaro Lucano, one of the most famous Italian liqueurs. It’s a beautiful white city. The view from this high spot on the area is very nice, but also in the city you often have a nice view of the city itself. Pisticci is highly recommended.

Otranto has a rich history. “Gate of the Orient” it is called. The Via Appia ran as far as Otranto, making it one of the most important ports on the Adriatic. Otranto deserves a longer visit. The best way to explore the town is a city walk through the centro storico, which is perceived by many people as a true jewel. The cathedral with an 800m2 floor mosaic is unique. The Basilica San Pietro is also a pearl and this church has well preserved frescoes in Byzantine style. Along the wharf it is good walking. We took a lot of pictures of a typical Italian wedding. Beautiful portraits. We tried to get in touch with the newlyweds, but unfortunately, we didn’t succeed.

We’ve been to Gallipoli twice in this period. The first time with very bad weather, but that was compensated by a very good lunch in a cozy trattoria, where it was good to stay during the showers. The second time it was beautiful weather. The name Gallipoli means in Greek: the beautiful city. And that’s it. It’s a vibrant city. You’re short of eyes. Upon entering the old town there is a small very bustling fish market near the castle. The fish and shellfish are nicely displayed. The fishermen are busy preparing the fish and touting it. We were at Gallipoli on Sunday and along the seaside fishermen were all over busy with repairing their nets. But always time for a chat. We love fishing villages anyway; Gallipoli is high on our list.

Nardo is the most important Baroque city of Puglia after Lecce. Interesting is the triangular square Piazza Antonio Salandra. Beautiful buildings on the square and an interesting column is in the middle. The Cathedral Santa Maria Assunta is well worth it. Another town to wander through. With the camera of course!

Some additional tips. Along several beaches are remnants of old towers. We have visited several of them. We found the following very special:

And of course, driving through the landscape, don’t forget to stop occasionally at characteristic old olive trees. Natural pieces of art.

We have compiled a photo book of our stay in Salento. We are quite proud about it. Unfortunately, the production costs are too high to offer it for sale. No one will buy it for that price. See the front cover here below. 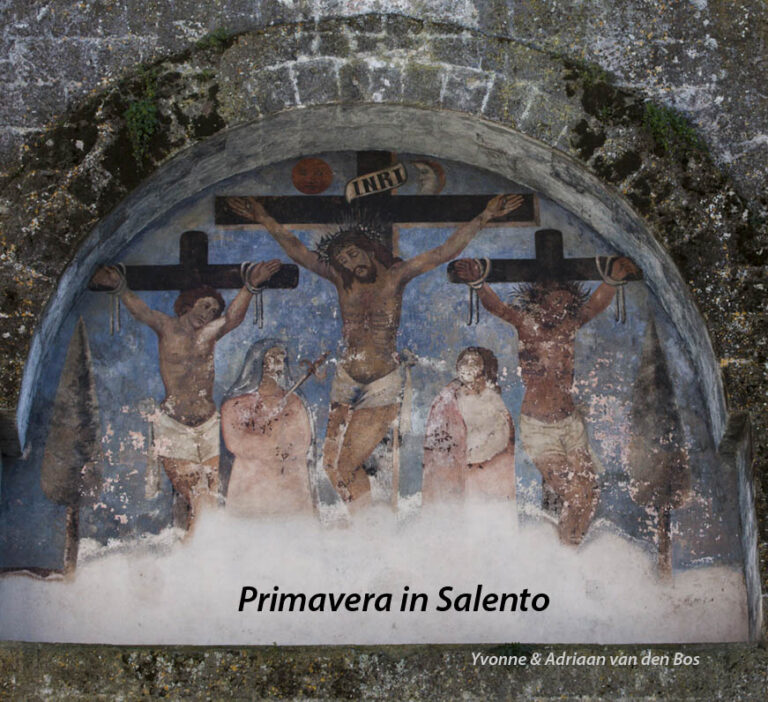